CONNED: HOW A SMALL WIsconsin VILLAGE SPENT A BILLION DOLLARS FOR FOXCONN

Chasing the 'Eighth Wonder of the World' has taken Mount Pleasant to the brink of bankruptcy. Three years later, everything we feared would happen has come true. To understand how we got here, let's start at the beginning.

The Foxconn Project in Wisconsin was announced on October 4, 2017, after a multi-state competition of tax incentive packages offered to the Taiwanese manufacturer. Heralded as the first Gen 10.5 LCD facility in North America, the project would create an enormous factory complex, unprecedented capital investment, and global supply chain of businesses which would create a workforce of 13,000 full time employees.

Mount Pleasant, a village of 26,000, located in southeast Wisconsin, a suburb of the city of Racine, was chosen as the "winner." 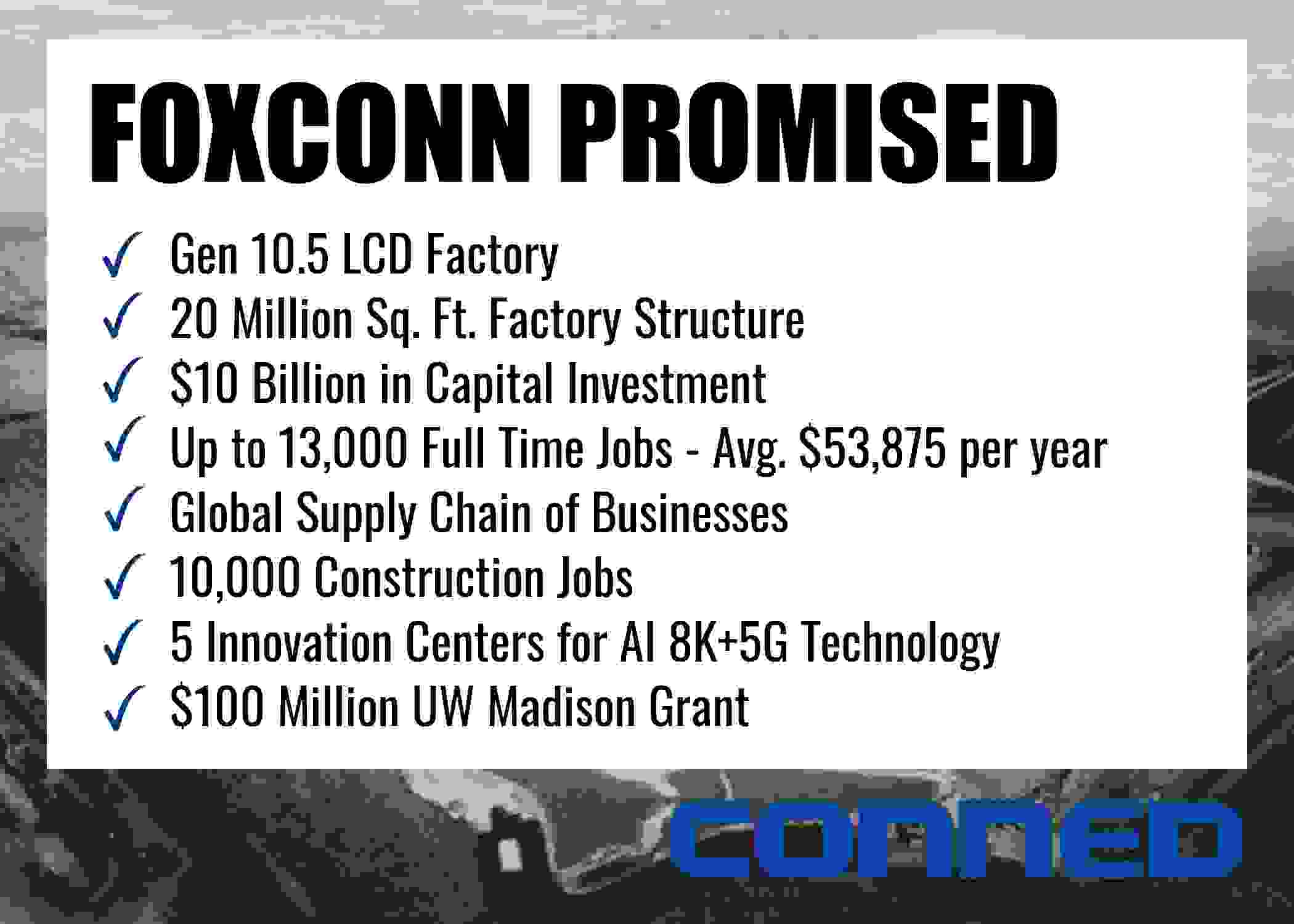 To win the Foxconn prize, the Village of Mount Pleasant, Racine County and the Racine County Economic Development Corporation put together a proposal which called for the creation of Tax Incremental District (TID) that would borrow $763 Million which would pay for land acquisition - roughly 2000 acres of land in area I & II, water and sewer service, and road construction for the Foxconn development.

Within 18 months, the size of the financing grew $150 Million more than anticipated, bringing the total local commitment to $913 Million.  The size and length of the financing was so large it took state legislation to approve.

In exchange for nearly $1 Billion in local spending, and $3.5 Billion in state incentives, Foxconn promised to build a Gen 10.5 LCD factory, that would be housed in 20 Million square foot facility and a $10 Billion capital investment. Foxconn promised to hire up to 13,000 full time employees with an average yearly salary of $53,875 per year. The Gen 10.5 LCD factory would also require a global supply chain of manufacturers - most notably a Corning glass factory, to supply the large pieces of glass for the LCD screens. The public was told that all of this would create an estimated 10,000 additional construction related jobs.

Unlike the State's contract with Foxconn, the Local Development Agreement was not performance based. Mount Pleasant put a billion dollars on the line, hoping it would pay off.

Too Good To Be True?

The size and scope of the project was met early with skepticism by technology and financial experts.

In the fall of 2018, Reply All came to Mount Pleasant to talk about Foxconn, meet the people involved and ask really smart questions. They got a story they didn't totally expect. The podcast debuted in December, and created a shit-storm at Village Hall. The podcast was re-released in 2020.

SETTING THE StagE: NO PUBLIC INPUT, NO TRANSPARENCY

Surprised? Purchasing and clearing nearly 3000 acres of farms, neighborhoods and homes, wasn't going to be cheap or easy. The decision Mount Pleasant made to offer to be the purchasing agent for land on behalf of Foxconn allowed the Village use a tool only available to the government - eminent domain.