Welcome to the biggest empty business park in Wisconsin. While local officials try to keep the delusion going, the truth is, none of Foxconn's promises have come true. 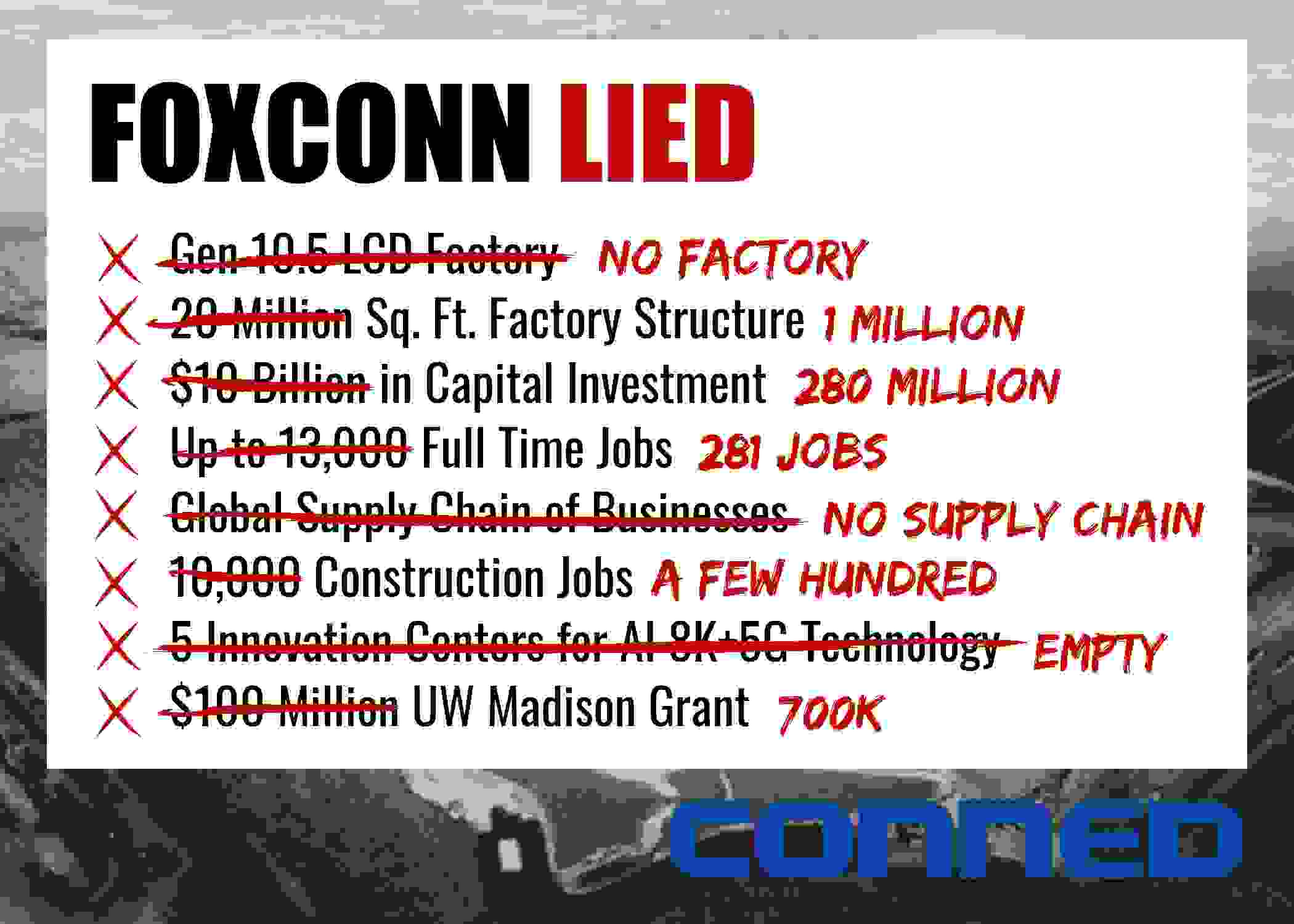 After the initial hoopla, subsequent eminent domain controversy, and the blighting drama, all eyes were fixed on exactly what Foxconn would do. Contractually obligated to put up a physical structure, Foxconn completed work on a multi-purpose building. Essentially a big garage.

Within months, Foxconn began to send mixed signals about what their plans for Wisconsin were. Foxconn chairman Terry Gou began talking about constructing a Gen 6 LCD factory instead of the Gen 10.5 - which is specifically outlined in the state and local contracts.

By Christmas, local officials were talking about the Gen 6 factory, as if that was the plan all along. But, then in January Gou announced,  “In Wisconsin we’re not building a factory. You can’t use a factory to view our Wisconsin investment,” Louis Woo, a special assistant to Foxconn chairman Terry Gou and a key negotiator in the Wisconsin deal, told Reuters.

Needless to say, everyone freaked out. Everyone. Donald Trump was forced to call Gou personally and have a "come to Jesus" talk with the chairman. Suddenly, the factory was back on. But the damage was done.

At the close of 2018, Foxconn failed to meet its hiring targets, having only reported 115 full time jobs from a target number of 1040. In 2019, Foxconn failed again, with 281 jobs from a target number of 2080. Foxconn's target hiring for 2020 was supposed to be 5200 full time jobs, they will not report their hiring numbers until later in the spring, but it is highly unlikely they have hired more than a few hundred people.

Foxconn was successful in building two structures for Fii - a subsidiary of FEWI. However, the State of Wisconsin has determined that these structures are not party to the state and local contract and therefor not eligible for any tax credits for hiring or capital investment.

While all the key players have exited, what hasn't changed is that Mount Pleasant is still spending in preparation for factory that is not happening. In 2020, the State of Wisconsin announced that even if Foxconn did build a Gen 6 factory, it would never employ more than 1500 people.

The building the Village calls the "fab," was rezoned from manufacturing to storage.

In 2017, President Donald Trump and the Wisconsin GOP struck a deal with Foxconn that promised to turn Southeastern Wisconsin into a tech manufacturing powerhouse.

In exchange for billions in tax subsidies, Foxconn was supposed to build an enormous LCD factory in the tiny village of Mount Pleasant, creating 13,000 jobs.

Three years later, the factory — and the jobs — don’t exist, and they probably never will.

Foxconn May Not Build A Factory At All, Says Top Company Exec.

They Demolished My House For This? Residents Outraged By The Factory That Fizzled

July 2019 -  President Trump announced the plan to build a $10 billion manufacturing hub two years ago, creating 13,000 blue collar jobs -- and in return, securing Foxconn more than $4 billion in tax breaks from the state of Wisconsin. But to make the plant possible, Mt. Pleasant had to borrow money to buy up land -- and now the town’s credit rating has been downgraded.